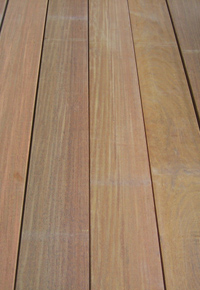 Ipe decking. It’s become the standard by which all other decking is measured, and for good reason: This tropical decking species has a lifespan of over 40 years, allowing it to add beauty and value to your home. So let’s learn a little more about this amazing product, shall we?

Ipe decking comes from Ipe, a Brazilian hardwood species often referred to as “ironwood.” Similar to iron in its density and hardness, this exceptionally stable species all-but eliminates concerns over warping and twisting. Wood movement can be described as tangential and radial, and most species move more significantly tangentially than radially; Ipe, however, is one of those rare species that move at a 1.1 ratio, making it highly dimensionally stable — an ideal characteristic for an exterior species that will endure plenty of shifts in moisture content. Issues like gap size are still significant to consider during installation, but at least with proper installation, Ipe can be trusted to retain its shape for decades.

Ipe’s extreme hardness and density translate into minimal absorption, allowing it to resist insect attacks and decay. It machines well, rarely splintering or splitting, and untreated Ipe carries a class A fire rating, making it almost as fire resistant as metal or concrete. 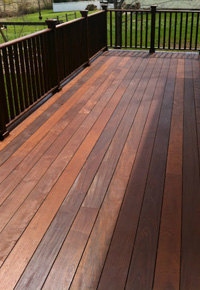 This king of tropical hardwood decking species is almost represented by A grade material; at the same time, there is no standardized grading system in place for tropical decking lumber. Here at Hardwood to Go, we deal with only Ipe that is free from defects on at least 3 sides. Our Ipe has cathedral or straight grain patterns with zero knots, sapwood, or borer holes.

Quartersawn Ipe is not defective, but because of the extreme hardness of the species, it may appear different from what you may expect. The internal structure of the wood, called medullary rays, is presented as areas of raised grain, or ridges. These areas do not need to be sanded; instead, they’re indications of extremely straight grain of a very stable species.

While there is some variation, Ipe mostly appears a deep reddish brown color typically associated with tropical decking. Because Ipe grows across an extensive geographical area, you can expect variation in color and appearance due to the soil chemistry, climate, and timing of cutting.

Despite our best efforts at quality control and sourcing only Ipe with the most lustrous coloring, your Ipe deck will naturally fade when it’s exposed to the elements. If you prefer its original rich brown color to a silvery patina, you’ll need to treat your decking wood periodically with timber oil or a combination of deck cleaner and brightener.

Request a Quote for Ipe.

Please note that as with all imported lumber, Ipe pricing is subject to change.

The hardness of Ipe makes installation a bit more eccentric as Ipe can wear out a drill and break drill bits. It's always a good idea to have extra bits and either extra drill batteries or a good old fashioned corded drill on hand. A good rule of thumb is to plan on the install of an Ipe deck to take twice as long as a Pressure treated lumber deck. This is probably a bit too liberal, but that way you can finish within your forecasted time.

We announce special deals first to our email list subscribers, so join today!